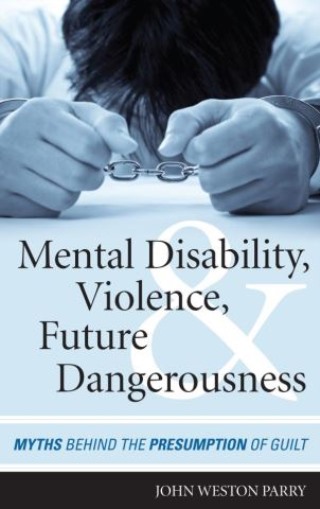 Myths Behind the Presumption of Guilt

When horrific acts of violence take place, events such as massacres in Boston, Newtown, CT, and Aurora, CO, people want answers. Who would commit such a thoughtless act of violence? What in their backgrounds could make them so inhumane, cruel, and evil? Often, people assume immediately that the perpetrator must have a mental disorder, and in some cases that does prove to be the case. But the assumption that most people with mental disorders are violent, prone to act out, and a threat to others and themselves, is clearly erroneous. Mental Disability, Violence, and Future Dangerousness thoroughly documents and explains how and why persons with mental disabilities who are perceived to be a future danger to others, the community, or themselves have become the most stigmatized, abused, and mistreated group in America, and what should be done to correct the resulting injustices.

Each year state and federal governments incarcerate, deny treatment to, and otherwise deprive hundreds of thousands of Americans with mental disabilities of their fundamental rights, liberties, and freedoms— including on occasion their lives—based on unreliable and misleading predictions that they are likely to be dangerous in the future. Yet, due to an exaggerated fear of violence in our society, almost no one seems concerned about these injustices, which exclusively affect Americans who have been impaired by mental disorders and the lack of treatment, especially after they have been abused as children or injured in combat. Instead, we appear to be oblivious to these injustices or comfortable in allowing them to become worse. Here, John Weston Parry carefully delineates the mishandling of persons with mental disabilities by the criminal and civil justice systems, and illustrates the ways in which we can identify and remedy those injustices.

John Weston Parry: John Weston Parry is the former Director of the American Bar Association’s Commission on Mental and Physical Disability Law (1982-2012) and Editor/Editor-in-Chief of the Mental and Physical Disability Law Reporter (1979-2011). Since 1977 he has published numerous books and articles on mental disability law and the rights of persons with mental disabilities. In 1987, he received the Manfred Guttmacher Award from the American Psychiatric Association and the American Academy of Psychiatry and Law.