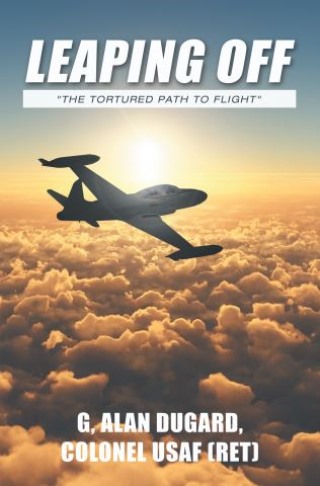 "The Tortured Path to Flight"

“Leaping Off” is a story about the rigors of becoming an Air Force pilot in a time when the need for pilots was at a low point, immediately following the Korean War. It entails the miniscule items used to wash out prospective pilots through physical and mental demands prior to being found qualified to enter pilot training. Once in the pipeline the fledgling fliers are now subjected to hours of flight time in various aircraft with instructors told to have little patience for infractions during flight. “Anyone can learn how to fly, but time does not allow all to fly”. The progression of skills demanded is an obstacle for many, the attitudes of instructors pays a toll and the ability of the students to conform to standards will determine who attains “Silver Wings”

G Alan Dugard Colonel USAF: Colonel Dugard is a command pilot whose twenty-six years of flying service began in Malden Missouri in Primary Flight School. During his career he flew over twenty-five different aircraft, including the F-102, U-2, B_47, B-52 and the supersonic B-58. He served as a B-52 squadron commander, participating in the “Eleven Day War’, known as Linebacker II, flying missions over Hanoi.. He was the wing commander of Three Combat Wings and was the final commander of a SAC wing in Southeast Asia. His awards include a Bronze Star, three Air Medals and three Meritorious Service Medals. His last assignment was serving as the 15th Air Force Director of Operations. He is presently a high school Administrator and Teacher.