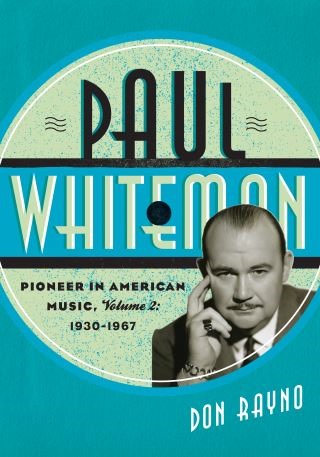 In a career that spanned 60 years, Paul Whiteman changed the landscape of American music, beginning with his million-selling recordings in the early 1920s of “Whispering,” “Japanese Sandman,” and “Three O’Clock in the Morning.” Whiteman would then introduce “symphonic jazz,” a powerful blend of the classical and jazz idioms that represented a whole new approach to modern American music, influencing generations of bandleaders and composers.

While some hold that at the close of the Roaring Twenties Whiteman’s musical hegemony quickly waned, Don Rayno illustrates in this second volume of Paul Whiteman: Pioneer in American Music how much of a dominant figure Whiteman remained. A major figure on the American music scene for decades to come, he would continue to lead critically-acclaimed orchestras, filling theaters and concert halls alike and diligently seeking out and nurturing musical talent on the largest scale of any orchestra leader in the 20th century.

In this second volume of Rayno’s magisterial treatment of the life and music of this remarkable maestro, Whiteman’s career during the second half of his life is explored in the fullest detail, as Whiteman conquers the worlds of theater and vaudeville, the concert hall, radio, motion pictures, and television, winning accolades in all of them. Through hundreds of interviews, extensive documentation, and exhaustive research of over nearly three decades, a portrait emerges of one of American music’s most important musical figures during the last century. Rayno paints a stunning portrait of Whiteman’s considerable accomplishments and far-reaching influence.

Don Rayno: Don Rayno serves as the director of Raleigh-Area Concerts of Prayer, a regional ministry in North Carolina that brings together Christian pastors and laypeople for united prayer activities.