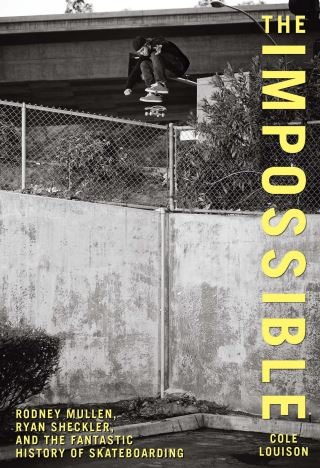 Rodney Mullen, Ryan Sheckler, and the Fantastic History of Skateboarding

Skateboarding:  the background, technicality, culture, rebellion, marketing, conflict, and future of the global sport as seen through two of its most influential geniuses
Since it all began half a century ago, skateboarding has come to mystify some and to mesmerize many, including its tens of millions of adherents throughout America and the world. And yet, as ubiquitous as it is today, its origins, manners, and methods are little understood.
The Impossible aims to get skateboarding right. Journalist Cole Louison gets inside the history, culture, and major personalities of skating. He does solargely by recounting the careers of the sport’s Yoda—Rodney Mullen, who, in his mid-forties, remains the greatest skateboarder in the world, the godfather of all modern skateboarding tricks—and its Luke Skywalker—Ryan Sheckler, who became its youngest pro athlete and a celebrity at thirteen. The story begins in the 1960s, when the first boards made their way to land in the form of off-season surfing in southern California. It then follows the sport’s spikes, plateaus, and drops—including its billion-dollar apparel industry and its connection with art, fashion, and music.
In The Impossible, we come to know intimately not only skateboarding, but also two very different, equally fascinating geniuses who have shaped the sport more than anyone else.