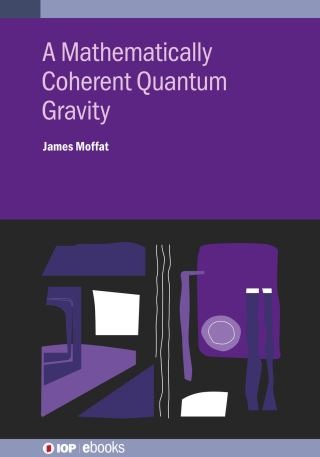 The development of a successful theory of quantum gravity in the context of the early universe is the key next step in theoretical physics. This book takes that step by describing a coherent mathematical framework for both the evolution of discrete space–time and the quantum graviton in the Planck regime. In doing so it successfully blends developments in both loop quantum gravity and superstring theory with data from the Large Hadron Collider. The result is a coherent mathematical framework that encapsulates newer developments on both the evolution of discrete space-time and the quantum graviton in the early universe. In doing so it addresses a key issue concerning loop quantum gravity raised by Ashtekar: describing conditions for the existence of locally translation-invariant quantum states; a quantum form of the diffeomorphisms of general relativity

James Moffat: Professor James Moffat C Math FIMA FOR has an honorary chair in Physics at the University of Aberdeen (Kings College) where he is part of the Quantum Gravity and Advanced Engineering research group. His www.Researchgate.net publication impact score puts him in the top 20% of scientists globally; based on over100 peer reviewed publications and several books, mostly published in the USA. Prior to that he was one of the most senior scientists advising the UK government on Defence and Security and has a global reputation for mathematical modelling. Winner of the President’s Medal of the Operational Research Society (The “Nobel Medal in Analytics”) the Napier medal in mathematics and the Einstein Medal of the US Marine Corps. He is an advisor to the Parliamentary and Scientific Committee of the UK Parliament.