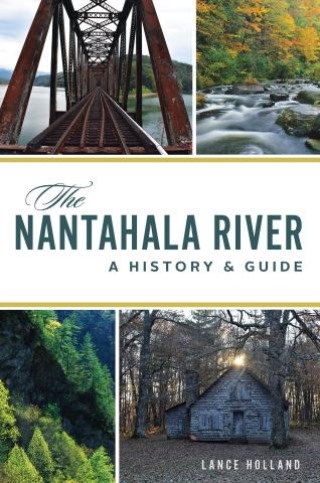 Most everyone who comes to western North Carolina has heard of the Nantahala, but few know its history. Long before it was a mecca for rafters and thrill seekers, it was traveled by naturalists and explorers from William Bartram to John C. Frémont. After the Cherokees were driven out, settlers arrived and began exporting the wealth of the mountains in the form of timber, talc and minerals. Tourists arrived on the Western Turnpike soon after, and the railroad brought more around 1890. The federal government began purchasing land for the new Nantahala National Forest, and the need for aluminum to fight World War II precipitated the construction of Fontana Lake and Nantahala Lake. Local author Lance Holland has crafted an enlightening and entertaining narrative history of this unique region.

Lance Holland: Lance Holland is a man of varied talents: backcountry guide, builder, author of Fontana: A Pocket History of Appalachia and coauthor of Hiking Trails of the Smokies. He worked for twenty years as a location manager/scout for motion pictures. Lance produced and directed the historic documentary films Nantahala: Land of the Noonday Sun and Hiking on Hazel Creek. He lives in the Stecoah community in the heart of the western North Carolina mountains and established the Southern Appalachian History Center in Bryson City, North Carolina.