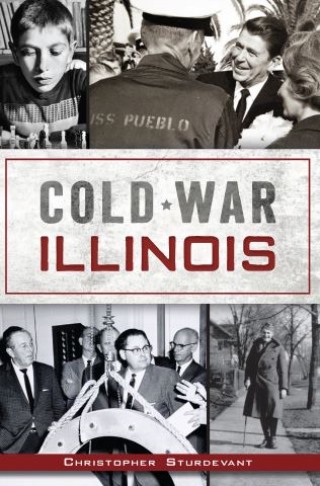 From Walt Disney and Ronald Reagan to chess matches and Nike missiles, trace the Illinois roots of prominent players in the longest and costliest conflict in American history. Discover a mobster's involvement in assassination attempts of Cuban leader Fidel Castro and how the nuclear age began at a college football field on Chicago's south side. Visit the graves of Communist Party leaders and the high-alert heritage of military bases across the state. Local author Christopher Sturdevant, chairman of the Midwest Chapter of the Cold War Museum, follows up his look into Cold War Wisconsin with its neighbor to the south in a fascinating tale of Illinois's role in the fight between East and West.

Christopher Sturdevant: Christopher Sturdevant is a children's librarian who resides in Milwaukee, Wisconsin. His interest in the Cold War began while growing up during the 1980s. Chris studied history and physics at Carroll University. He is a United States Air Force veteran and chairman of the Midwest Chapter of the Cold War Museum in Washington, D.C. In addition, Chris has represented Team USA in masters-level track championships on three continents. His travels have taken him to North Korea, Chernobyl and Afghanistan.