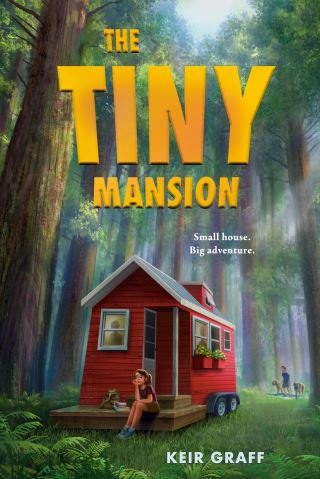 In this pitch-perfect middle grade adventure, twelve-year-old Dagmar must endure a summer living off-the-grid with her family in a tiny home.

The last thing Dagmar wants is to spend her summer vacation squished into a tiny house with her dad, her stepmom, and her annoying five-year-old half brother. But after a sudden financial setback, her family is evicted from their Oakland apartment, and that's just where they end up, parked among the towering redwoods of Northern California.

As Dagmar explores the forest around their new and (hopefully) temporary home, she discovers they are living next door to an eccentric tech billionaire and his very unusual extended family. There's his brother, a woodsman who sets dangerous booby traps all over the place, and his sister, a New Age animal lover who meditates to whale songs in an isolation tank. And then there's the billionaire's son, Blake, who has everything he could ever wish for--except maybe a friend.

But when a wildfire engulfs the forest, everyone--rich and poor, kid and adult--will have to work together to escape. And with both families at risk of losing everything, it turns out it's not the size of the home but the people you share it with that matters.

Keir Graff: Keir Graff is the author of the middle grade novels The Phantom Tower, The Matchstick Castle, and The Other Felix, and a handful of books for grown-ups. Keir lives in Chicago with his wife, Marya, his sons, Felix and Cosmo, and two cats, Toothless and Totoro. Learn more at keirgraff.com and follow him on Twitter @keirgraff.