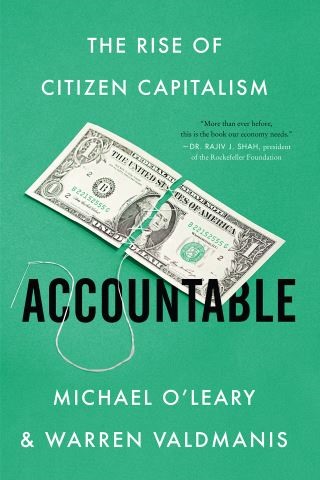 The Rise of Citizen Capitalism

“More than ever before, this is the book our economy needs.” – Dr. Rajiv Shah, president of the Rockefeller Foundation

“Unwilling to settle for easy answers or superficial changes, O’Leary and Valdmanis push us all to ask more of our economic system.” – Senator Michael F. Bennet

This provocative book takes us inside the fight to save capitalism from itself.

Corporations are broken, reflecting no purpose deeper than profit. But the tools we are relying on to fix them—corporate social responsibility, divestment, impact investing, and government control—risk making our problems worse.

With lively storytelling and careful analysis, O’Leary and Valdmanis cut through the tired dogma of current economic thinking to reveal a hopeful truth: If we can make our corporations accountable to a deeper purpose, we can make capitalism both prosperous and good.

What happens when the sustainability-driven CEO of Unilever takes on the efficiency-obsessed Warren Buffett? Does Kellogg’s—a company founded to serve a healthy breakfast—have a sacred duty to sell sugary cereal if that’s what maximizes profit? For decades, government has tried to curb CEO pay but failed. Why? Can Harvard students force the university to divest from oil and gas? Does it even matter if they do?

O’Leary and Valdmanis, two iconoclastic investors, take us on a fast-paced insider’s journey that will change the way we look at corporations. Likely to spark controversy among cynics and dreamers alike, this book is essential reading for anyone with a stake in reforming capitalism—which means all of us.

Michael O'Leary was on the founding team of Bain Capital’s social impact fund. Previously, he invested in consumer, industrial, and technology companies through Bain Capital’s private equity fund. He has served as an economic policy adviser in the United States Senate and on two presidential campaigns. Michael studied philosophy at Harvard College and earned his MBA from the Stanford Graduate School of Business. He lives in New York.

Warren Valdmanis leads a social impact firm that invests in the American workforce. He was previously a managing director with Bain Capital’s social impact fund, and before that invested with Bain Capital’s private equity team for over a decade. He grew up in Canada and has lived and worked in Australia, Chile, France, Hong Kong, Japan, South Africa, and the United States. Warren studied economics at Dartmouth College and earned his MBA from Harvard Business School. He lives with his wife, Kristin, and four children in Portland, Maine.