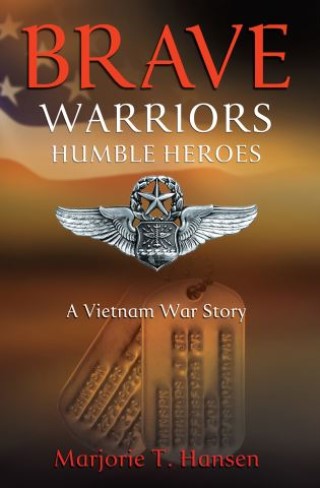 A wife tells of her husband’s combat missions—and the Agent Orange exposure that changed both their lives.

Through her husband’s letters from Southeast Asia about his combat missions in Vietnam and over the Ho Chi Minh Trail in Laos in 1971 and 1972, Marge Hansen shares a gripping journey into one of the most divisive and turbulent periods in the nation’s history.

Brave Warriors, Humble Heroes: A Vietnam War Story captures in a flier’s words the conflict, drama, frustration, heroism, and longing for home and family that mark combat missions. Through meticulous research and compelling narrative, Marge brings to readers a chance to understand what may have been only an ongoing headline in the news for those at home or a distant episode in American history for younger readers. In her voice and Charlie’s, she captures the experience of those who serve and those who support them. For Marge and Charlie, the war was immediate and personal and has not ended; both were impacted by the legacy of Agent Orange—he from his assignment to front-line bases and she from her visit to him at one of those bases. Brave Warriors, Humble Heroes recounts the story of one war, one hero, one marriage, and one family. This book stands for all those whose voices have not been heard.