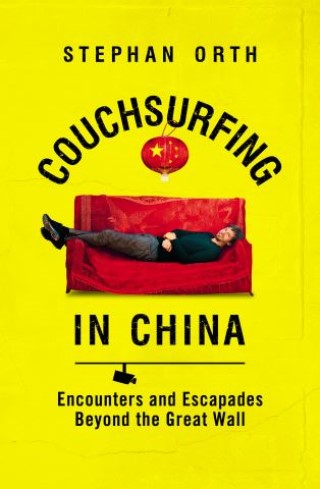 Encounters and Escapades Beyond the Great Wall

China can be a challenging travel destination, with its strict visa conditions, the language barrier and internet censorship. Couchsurfer Stephan Orth chooses a different path than most and gains an insider view of the nation, directly from the living rooms of locals. He talks to them about their dreams and fears, and about where this huge country is heading. Concrete facades sometimes conceal great surprises, and Orth is on a mission to discover the real China.

In Couchsurfing in China, the award-winning travel journalist spends three months exploring the Middle Kingdom: from the gamblers’ paradise of Macau, to the mountainous region of Yunnan Province, to the city of Dandong on the North Korean border. Orth visits high-tech megacities and remote villages, meeting artists critical of the regime and ethnic minorities forced into re-education camps. Utterly out of place, he finds himself censored as a guest on live TV and almost joins an outlawed sect.

On his travels, Orth uncovers the complicated realities of life in a country that encompasses a bewildering mixture of old and new, natural and artificial, beautiful and chaotic – a place poised to become the future number-one world power. The result is an intriguing travelogue full of insight, humour and revelation.

Stephan Orth: Stephan Orth’s three books, Sorry, We Missed the Runway, Couchsurfing in Iran and Couchsurfing in Russia, have all been major bestsellers in Germany. They have been translated into ten foreign languages. Two of his feature stories, one about Russia and one about China, won the Columbus Award for travel writers. He has written for Der Spiegel, National Geographic, Time Off and the Courier Mail. Orth owns five backpacks, four sleeping bags and three tents, but no wheeled suitcase.