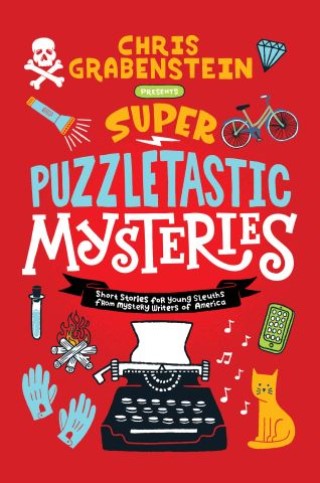 Short Stories for Young Sleuths from Mystery Writers of America

Bestselling author Chris Grabenstein and the Mystery Writers of America bring together twenty peerless puzzles—from bestselling authors such as Peter Lerangis, Stuart Gibbs, Lauren Magaziner, Kate Milford, and, of course, Grabenstein himself—in an anthology of mystery short stories that invite readers to try to unravel the riddles themselves.

From tales of hapless superheroes and stolen squirrel monkeys to murderous triplets and haunted basements, these thrilling, puzzling, and hilarious cases have one thing in common—YOU get a chance to be the detective before the author reveals the solution.

Chris Grabenstein is a New York Times bestselling author and the winner of multiple awards for his Haunted Mystery series. He lives in New York City with his wife, JJ, two cats, and a dog named Fred, who starred on Broadway in Chitty Chitty Bang Bang.

Stuart Gibbs is the author of the FunJungle series as well as the New York Times bestselling Spy School and Moon Base Alpha series. He has written the screenplays for movies like See Spot Run and Repli-Kate, worked on many animated films, and developed TV shows for Nickelodeon, Disney Channel, ABC, and Fox. Stuart lives with his wife and two children in Los Angeles. You can visit him online at www.stuartgibbs.com.

Lamar Giles writes for teens and adults. He is the author of the Edgar Award finalists Fake ID and Endangered as well as the critically acclaimed Overturned, Spin, and The Last Last-Day-of-Summer. He is a founding member of We Need Diverse Books and resides in Virginia. Visit him online at www.lamargiles.com.

Bruce Hale has written and/or illustrated over sixty books for kids and is the author of Clark the Shark; Clark the Shark Dares to Share; the award-winning Chet Gecko Mysteries series; Snoring Beauty, one of Oprah’s Recommended Reads for Kids; and the School for S.P.I.E.S. series. In his free time, Bruce enjoys hiking, watching movies, and making music. He lives in Santa Barbara, California, with his wife, dog, and many hats. You can catch him online at www.brucehale.com.

Peter Lerangis is the author of more than one hundred and sixty books, which have sold more than five and half million copies and been translated into thirty-three different languages. These include the five books in the New York Times bestselling Seven Wonders series, The Colossus Rises, Lost in Babylon, The Tomb of Shadows, The Curse of the King, and The Legend of the Rift, and two books in the 39 Clues series. He lives in New York City with his family.

||||||Taylor Whitesides always wished to be an author. Somehow he accomplished it without the help of a genie and wrote the acclaimed Janitors and Wishmakers series. When he’s not writing, Tyler loves eating good food, playing drums, and fishing. He lives in northern Utah with his wife and son. Visit him online at www.tylerwhitesides.com.