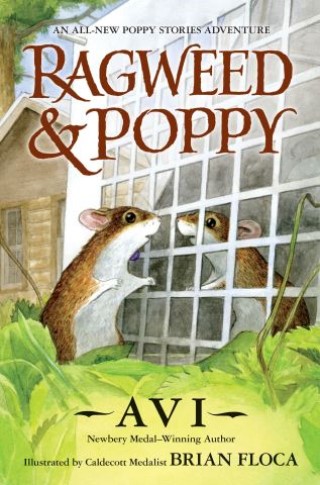 The first new book about Poppy in more than ten years, from Newbery Medal-winning author Avi with illustrations throughout by Caldecott Medal-winning artist Brian Floca.

Ragweed and Poppy is one of the "10 Top Middle-Grade Summer Reads," according to Kirkus Reviews!

How did Ragweed and Poppy meet and become friends? This book tells their hilarious story! Adventurous golden mouse Ragweed is on a freight train leaving the city of Amperville. On his journey, he meets Lotar, a young and bothersome raccoon who has lost his mother. Though Ragweed doesn’t really want to help the raccoon, by doing so he winds up in Dimwood Forest.

Ragweed is now ready to strike off on his own, but it’s not long before he hears a cry for help. Following the sound of the voice, he finds a cage with a deer mouse trapped inside. When he asks the mouse’s name, she replies, “Poppy.”

The story of Ragweed comes to Poppy's aid, and how Poppy comes to his, is how their rousing and fateful friendship begins. As for that annoying raccoon, he keeps getting in the way.

Fans of animal tales and especially of the beloved previous books in the Poppy series will love Ragweed and Poppy!