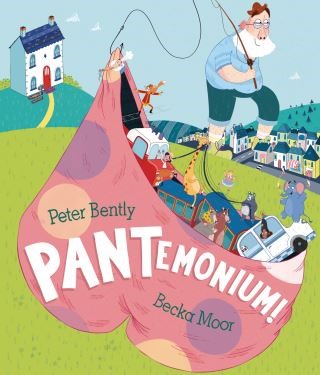 Fred the Giant's off fishing today. But look! His GIANT PANTS are caught on the end of his hook!

Follow Fred as he drags his giant pants all around town, scooping up a cat, the baker and all his cakes, a fire engine . . . you'd be amazed how much fits in those megapants. What pantemonium!

Peter Bently: Peter Bently lives in England. He studied languages at Oxford University and has written more than 40 titles, one of which led to him win the Roald Dahl Funny Prize 2011.