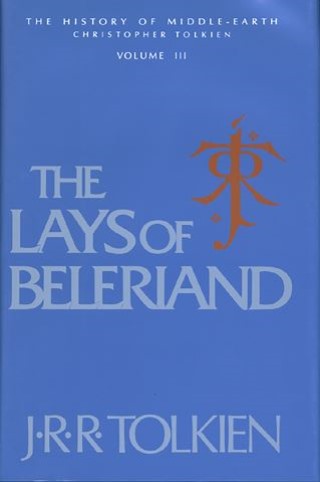 The Lays Of Beleriand

The third volume that contains the early myths and legends which led to the writing of J.R.R. Tolkien’s epic tale of war, The Silmarillion.

This, the third volume of The History of Middle-earth, gives us a privileged insight into the creation of the mythology of Middle-earth, through the alliterative verse tales of two of the most crucial stories in Tolkien’s world—those of Turien and Luthien. The first of the poems is the unpublished Lay of The Children of Hurin, narrating on a grand scale the tragedy of Turin Turambar. The second is the moving Lay of Leithian, the chief source of the tale of Beren and Luthien in The Silmarillion, telling of the Quest of the Silmaril and the encounter with Morgoth in his subterranean fortress.

Accompanying the poems are commentaries on the evolution of the history of the Elder Days, which was much developed during the years of the composition of the two Lays. Also included is the notable criticism in detail of the Lay of Lethian by C.S. Lewis, Tolkien's friend and colleague, who read the poem in 1929. By assuming that this poem is actually a fragment from a past lost in history, Lewis underlined the remarkable power of its author's imaginative talents and academic competence.

J.R.R. Tolkien:
J.R.R. TOLKIEN (1892–1973) is the creator of Middle-earth and author of such classic and extraordinary works of fiction as The Hobbit, The Lord of the Rings, and The Silmarillion. His books have been translated into more than fifty languages and have sold many millions of copies worldwide.