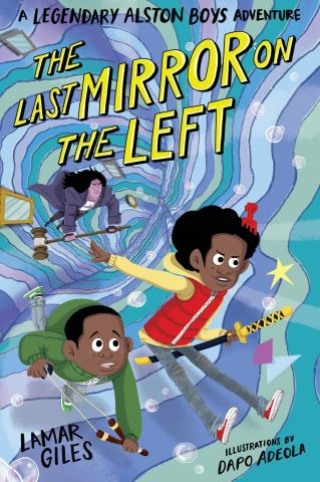 The Last Mirror on the Left

In The Last Mirror on the Left, the second Legendary Alston Boys mystery from Edgar Award nominee Lamar Giles, Otto and Sheed must embark on their most dangerous journey yet, bringing a fugitive to justice in a world that mirrors their own but has its own rules to play by.

Unlike the majority of Logan County's residents, Missus Nedraw of the Rorrim Mirror Emporium remembers the time freeze from The Last Last-Day-of-Summer—and how Otto and Sheed took her mirrors without permission in order to fix their mess.

Usually that’s an unforgivable offense, punishable by a million-year sentence. However, she’s willing to overlook the cousins’ misdeeds if they help her with a problem of her own. One of her worst prisoners has escaped, and only the Legendary Alston Boys of Logan County can help bring the fugitive to justice!

And don't miss the Legendary Alston Boys in their next adventure: The Last Chance for Logan County!

Lamar Giles: Lamar Giles is an Edgar Award-nominated author and has published three young adult novels. He is the co-founder of #WeNeedDiverse books and has edited two #WNDB anthologies, including 2018's Fresh Ink. He lives in Harrisonburg,VA. www.lrgiles.com, Twitter: @LRGiles, Instagram: @LamarGiles