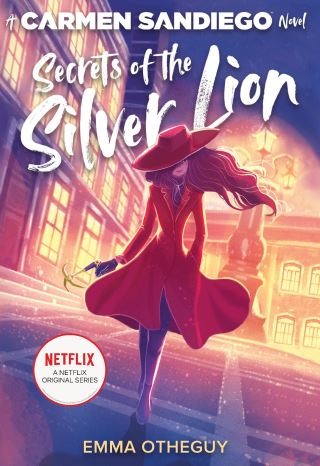 Secrets of the Silver Lion

From the bustling streets of New York City to the cobblestones of Seville and the silver mines high in the Andes Mountains of Bolivia, Carmen is off on another quest to stop VILE in this heart-pounding caper full of twists and turns!

For centuries, the magnificent Throne of Felipe has stood with two empty spaces beside its famous silver arrow—spaces where the silver castle and lion should have been. And now, with the recent discovery of the silver castle within a secret vault in Seville, Spain, the hunt is on for the third silver icon. With all three pieces in the place, the throne will be enormously valuable—making it a hot item on VILE’s radar. Now it’s up to Carmen and crew to find the silver lion before VILE does, and protect the throne from winding up in the wrong hands.

Emma Otheguy is the author of the bilingual picture book Martí’s Song for Freedom about Cuban poet and national hero José Martí, as well as her middle-grade novel Silver Meadows Summer, which Pura Belpré-winning author Ruth Behar called “a magnificent contribution to the diversity of the new American literature for young readers.” Martí’s Song for Freedom received five starred reviews, was named a Best Book of the Year by Kirkus Reviews, School Library Journal, and the New York Public Library, and was the recipient of the International Literacy Association’s 2018 Children’s and Young Adult Book Award in Intermediate Nonfiction. Emma’s forthcoming projects include her contribution to Newbery Honor-winning author Adam Gidwitz’s Unicorn Rescue Society middle grade fantasy series, to be released in spring 2020, as well as a picture book, A Sled for Gabo, due out in fall 2020. Emma lives in New York City. Visit her online at emmaotheguy.com.