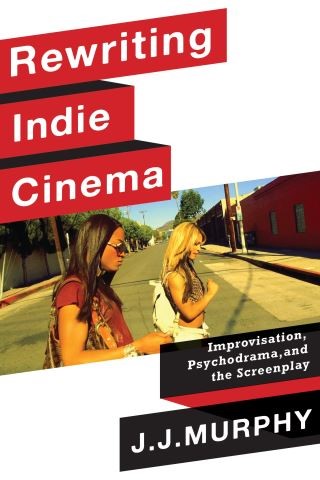 Improvisation, Psychodrama, and the Screenplay

Most films rely on a script developed in pre-production. Yet beginning in the 1950s and continuing through the recent mumblecore movement, key independent filmmakers have broken with the traditional screenplay. Instead, they have turned to new approaches to scripting that allow for more complex characterization and shift the emphasis from the page to performance.

In Rewriting Indie Cinema, J. J. Murphy explores these alternative forms of scripting and how they have shaped American film from the 1950s to the present. He traces a strain of indie cinema that used improvisation and psychodrama, a therapeutic form of improvised acting based on a performer’s own life experiences. Murphy begins in the 1950s and 1960s with John Cassavetes, Shirley Clarke, Barbara Loden, Andy Warhol, Norman Mailer, William Greaves, and other independent directors who sought to create a new type of narrative cinema. In the twenty-first century, filmmakers such as Gus Van Sant, the Safdie brothers, Joe Swanberg, and Sean Baker developed similar strategies, sometimes benefitting from the freedom of digital technology. In reading key films and analyzing their techniques, Rewriting Indie Cinema demonstrates how divergence from the script has blurred the divide between fiction and nonfiction. Showing the ways in which filmmakers have striven to capture the subtleties of everyday behavior, Murphy provides a new history of American indie filmmaking and how it challenges Hollywood industrial practices.

J. J. Murphy: J. J. Murphy is professor of film and Hamel Family Distinguished Chair in Communication Arts at the University of Wisconsin–Madison. He is the author of Me and You and Memento and Fargo: How Independent Screenplays Work (2007) and The Black Hole of the Camera: The Films of Andy Warhol (2012).