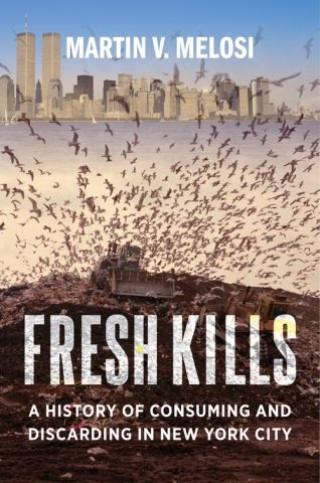 A History of Consuming and Discarding in New York City

Fresh Kills—a monumental 2,200-acre site on Staten Island—was once the world’s largest landfill. From 1948 to 2001, it was the main receptacle for New York City’s refuse. After the 9/11 attacks, it reopened briefly to receive human remains and rubble from the destroyed Twin Towers, turning a notorious disposal site into a cemetery. Today, a mammoth reclamation project is transforming the landfill site, constructing an expansive park three times the size of Central Park.

Martin V. Melosi provides a comprehensive chronicle of Fresh Kills that offers new insights into the growth and development of New York City and the relationship among consumption, waste, and disposal. He traces the metamorphoses of the landscape, following it from salt marsh to landfill to cemetery and looks ahead to the future park. By centering the problem of solid-waste disposal, Melosi highlights the unwanted consequences of mass consumption. He presents the Fresh Kills space as an embodiment of massive waste, linking consumption to the continuing presence of its discards. Melosi also uses the landfill as a lens for understanding Staten Island’s history and its relationship with greater New York City. The first book on the history of the iconic landfill, Fresh Kills unites environmental, political, and cultural history to offer a reflection on material culture, consumer practices, and perceptions of value and worthlessness.

Martin V. Melosi: Martin V. Melosi is Cullen Professor Emeritus of History and founding director of the Center for Public History at the University of Houston. His many books include The Sanitary City: Urban Infrastructure in America from Colonial Times to the Present (2000) and Atomic Age America (2013).