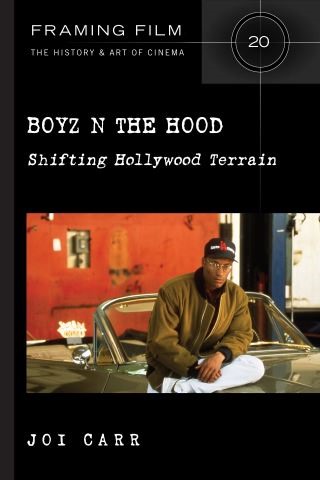 In 1991, Boyz N the Hood made history as an important film text and the impetus for a critical national conversation about American urban life in African American communities, especially for young urban black males. Boyz N the Hood: Shifting Hollywood Terrain is an interdisciplinary examination of this iconic film and its impact in cinematic history and American culture. This interdisciplinary approach provides an in-depth critical perspective of Boyz N the Hood as the embodiment of the blues: how Boyz intimates a world beyond the symbolic world Singleton posits, how its fictive stance pivots to a constituent truth in the real world. Boyz speaks from the first person perspective on the state of being "invisible." Through a subjective narrative point of view, Singleton interrogates the veracity of this claim regarding invisibility and provides deep insight into this social reality. This book is as much about the filmmaker as it is about the film. It explores John Singleton’s cinematic voice and helps explicate his propensity for a type of folk element in his work (the oral tradition and lore). In addition, this text features critical perspectives from the filmmaker himself and other central figures attached to the production, including a first-hand account of production behind the scenes by Steve Nicolaides, Boyz’s producer. The text includes Singleton’s original screenplay and a range of critical articles and initial movie reviews.

Joi Carr is a Professor of English and Film Studies at Pepperdine University, Seaver College, currently serving as the Director of Film Studies and Creative/Program Director of the Multicultural Theatre Project (an interdisciplinary art-based critical pedagogy). She received her PhD from Claremont Graduate University.