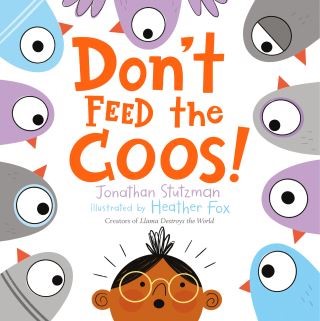 The dynamic team behind Llama Destroys the World returns with a laugh-out-loud tale about the dangers…of feeding pigeons!

When you see a coo, you will be tempted to give it a treat.
Coos are adorable, peaceful, kind of silly.
But DON'T FEED THE COO!
If you feed one, they will ALL come...

So begins Don't Feed the Coos, a cautionary tale that details the fallout when a little girl decides to share some bread with a coo (aka pigeon). From the park to home to the arcade to karate practice, the coos follow the generous-but-foolish girl who didn’t heed the warning. Because when you give a coo a crumb…the entire population of coos will come! But fret not: our spunky little heroine will discover that even the biggest of problems can be solved with a little determination.

In the grand tradition of If You Give a Mouse a Cookie, Don't Feed the Coos reminds us that the most disastrous of reactions can come from the most innocent of actions. Jonathan Stutzman and Heather Fox deliver another ridiculous and hilarious story, sure to delight fans of The Bad Seed and I Want My Hat Back.

Jonathan Stutzman: Jonathan Stutzman is an award-winning filmmaker and a picture book author. He is the author of numerous books for children, including Don't Feed the Coos, Santa Baby, the Llama trilogy, and the Tiny T-Rex series. He received his masters at Temple University for film and digital media. He lives in Lititz, Pennsylvania, with his wife, the illustrator Heather Fox. Fitz and Cleo is his debut graphic novel.

Jonathan Stutzman is an award-winning independent filmmaker and writer of books for children, including Llama Destroys the World and Tiny T. Rex and the Impossible Hug. When he isn’t writing, Jonathan loves books, playing with his puppy, exploring, and watching old black and white movies. Jonathan lives in the wilds of Lancaster, Pennsylvania, and as you read this, he is probably writing something new.

Heather Fox is an illustrator of stories for children, including Llama Destroys the World. Her art is filled with quirk and dashes of whimsy that is created in both doodle and digital forms. When she isn’t creating, she is probably drinking a hot cup of coffee, eating Chinese food, or chasing down her dog (Sir Hugo), who likes to steal her socks. She lives in Lancaster, Pennsylvania.