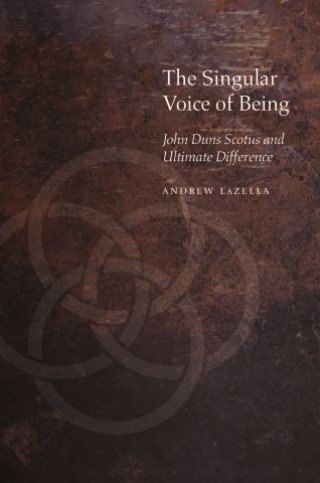 The Singular Voice of Being

The Singular Voice of Being reconsiders John Duns Scotus’s well-studied theory of the univocity of being in light of his less explored discussions of ultimate difference. Ultimate difference is a notion introduced by Aristotle and known by the Aristotelian tradition, but one that, this book argues, Scotus radically retrofits to buttress his doctrine of univocity. Scotus broadens ultimate difference to include not only specific differences, but also intrinsic modes of being (e.g., finite/infinite) and principles of individuation (i.e., haecceitates). Furthermore, he deepens it by divorcing it from anything with categorical classification, such as substantial form. Scotus uses his revamped notion of ultimate difference as a means of dividing being, despite the longstanding Parmenidean arguments against such division. The book highlights the unique role of difference in Scotus’s thought, which conceives of difference not as a fall from the perfect unity of being but rather as a perfective determination of an otherwise indifferent concept. The division of being culminates in individuation as the final degree of perfection, which constitutes indivisible (i.e., singular) degrees of being. This systematic study of ultimate difference opens new dimensions for understanding Scotus’s dense thought with respect to not only univocity, but also to individuation, cognition, and acts of the will.

Andrew T. LaZella: Andrew LaZella is Associate Professor of Philosophy at the University of Scranton. He received his PhD from DePaul University in 2010.