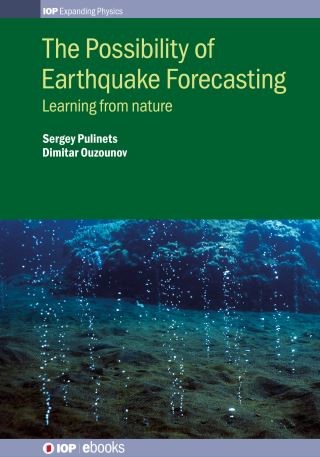 The Possibility of Earthquake Forecasting

The Possibility of Earthquake Forecasting uses a holistic approach to address the problems of earthquake forecasting, demonstrating the earthquake preparation process as a complex system that relies on the interaction of different geospheres. The purpose of the book is to widen the understanding of the earthquake preparation process and to inform the audience that not only seismometers are necessary for earthquake forecasting. It illustrates how applications of space technologies like remote sensing in situ measurements and GPS TEC provide rich information on the process and help to conclude that the earthquake is coming. The authors explain the physical nature of the observed pre-earthquake anomalies and how their approach is working by utilizing rich illustrations of precursory phenomena in different geospheres.

Sergey Pulinets: Sergey Pulinets graduated from the Physical Department of Lomonosov Moscow State University. He got his PhD at Pushkov Institute of Terrestrial Magnetism, Ionosphere and Radiowave Propagation of the Russian Academy of Sciences (IZMIRAN) where he worked for 30 years. Beginning in the 1990s, his scientific interests turned to the studies of the physical precursors of earthquakes, and mechanisms of their generation. As Senior scientist of Institue of Geophysics of UNAM he spent several years in Mexico studying these phenomena in seismically active regions of Mexico and published together with Dr. Boyarchuk the monograph Ionospheric Precursors of Earthquakes in 2004). He is a member of Scientific Council of the China Seismo-Electromagnetic Satellite (SCES). As an invited professor or lecturer he gave his research and lecture courses in Taiwan, Japan, Pakistan, and the USA. Dr. Pulinets is an individual member of the International Union of Radio Sciences (URSI), and a full member of the Russian Academy of Natural Sciences.|||Dimitar Ouzounov received his PhD in Geophysics in 1990 at the Schmidt Institute of Physics of the Earth, Russian Academy of Sciences, Moscow. Since October 2009 he has been an Associate Professor in Geophysics at the Center of Excellence in Earth Systems Modeling & Observations, Chapman University, Orange, CA. He became a guest investigator for two satellite missions to study electromagnetic signals from space in relation to earthquake and volcanoes - the French DEMETER (2004) and the Chines CSES1 (2017). He is the author of about two hundred papers and conference proceedings. He has also co-authored with Dr Pulinets two other books on pre-earthquake processes and on earthquake precursors in the atmosphere and ionosphere.