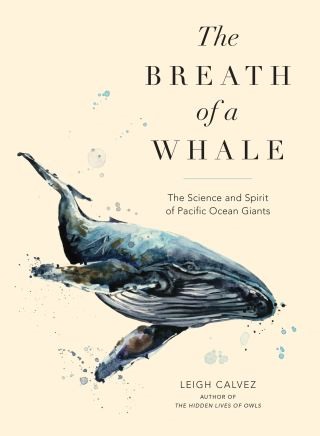 The Breath of a Whale

The Science and Spirit of Pacific Ocean Giants

"Best Book About the Environment" by Chicago Review of Books

An ode to marine life and the natural world, these essays reveal the elusive lives of whales in the Pacific Ocean—home to orcas, humpbacks, blue, gray, and sperm whales

Leigh Calvez has spent a dozen years researching, observing, and probing the lives of the giants of the deep. Here, she relates the stories of nature's most remarkable creatures, including the familial orcas in the waters of Washington State and British Columbia; the migratory humpbacks; the ancient, deep-diving blue whales, the largest animals on the planet. The lives of these whales are conveyed through the work of dedicated researchers who have spent decades tracking them along their secretive routes that extend for thousands of miles, gleaning their habits and sounds and distinguishing peculiarities.

Calvez author invites the reader onto a small research catamaran maneuvering among 100-foot long blue whales off the coast of California; or to join the task of monitoring patterns of humpback whale movements at the ocean surface: tail throw, flipper slap, fluke up, or blow. To experience whales is breathtaking. To understand their lives deepens our connection with the natural world.

Leigh Calvez: Leigh Calvez has worked with whales and dolphins as a scientist, naturalist, and nature writer. As a scientist, she was Research Director for the Ocean Mammal Institute on such projects as the effect of vessel traffic on endangered humpback whales off Maui, Hawaii. She also led the only independent research team observing the US Navy's testing of Low Frequency Active Sonar on humpback whales in their nurseries in Hawaii in 1998. As a naturalist, Leigh has worked on whale watch boats in Massachusetts watching humpback and finback whales on the feeding grounds of Stellwagen Bank, in Hawaii on the breeding grounds of the humpback whale, and in the San Juan Islands of Washington State, watching pods of orca whales. She has also led extended whale watching journeys to New Zealand, British Columbia, and the Azores Islands off Portugal.