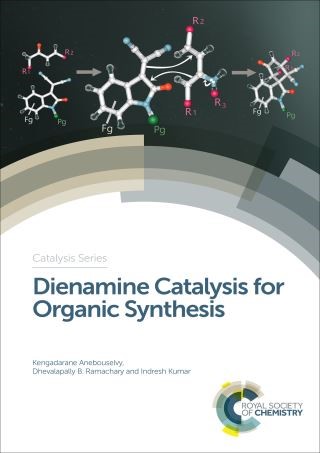 High-yielding asymmetric synthesis of bioactive and natural products through mild catalysis is an efficient approach in reaction engineering. In the early days, synthetic chemists mainly focused on the synthesis of complex molecules, with less attention on the reaction efficiency and eco-friendly conditions. Recent investigations have been directed towards the development of atom economy, eco-friendly and enantioselective synthesis for more targeted and efficient synthesis.

Building on the momentum of this rapidly expanding research area, Dienamine Catalysis for Organic Synthesis will provide a comprehensive introduction, from the preformed species, in situ generation and onto their applications in the synthesis of bioactive molecules and natural products.

Kengadarane Anebouselvy: |||Dr Ramachary obtained his Doctoral degree (Organic Synthesis) at the Indian Institute of Science, Bangalore for his research work on “Total Synthesis of Sesquiterpenes Containing Three Contiguous Quaternary Carbon Atoms” (with Prof. A. Srikrishna). In January 2002, he moved to Prof. Carlos F. Barabas III research group as Skaggs Post Doctoral fellow at The Scripps Research Institute, San Diego. After three years of studies at TSRI, he then joined as Faculty member in School of Chemistry, University of Hyderabad in Jan 2005, where at present he is an Associate Professor. After joining in University of Hyderabad as a faculty member in the School of Chemistry, he has started a research programme on the development of new sequential one-pot pathways for the diversity oriented synthesis (DOS) of polycyclic natural product-like compounds, drugs and drug-like molecules by employing various complexity generating reactions such as asymmetric aldol, Michael, Mannich, Diels-Alder and amination reactions, click reaction and other organocatalytic reactions on simple starting materials.|||