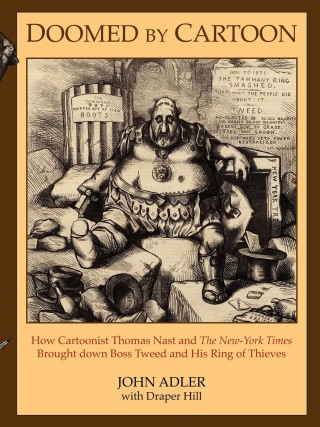 He was an unethical, bullying, and narcissistic politician; a blow-hard real estate magnate and notorious swindler; a master manipulator who thrived off voter fraud, graft, and the collusion of his right-hand sycophants. This is the 1870s.

The legendary William “Boss” Tweed, senator and third-largest landowner in New York City, is on a roll. He and his thieving minions have already duped the city out of an estimated two-billion dollars. It wasn’t going to be easy exposing him. He controlled the press—except for the magazine, Harper’s Weekly. And Harper’s had an invaluable weapon against the humorless and seemingly invincible Tweed: Thomas Nast, an influential political cartoonist who, day by day, brought Tweed’s corruption to light. With pen and ink, and a savage and righteous wink, Thomas Nast was determined to topple an empire.

Told through Nast’s scathing 160-plus serialized cartoons, the remarkable and unbelievable true story of Nast vs. Tweed was not only unprecedented for its day, but it set the tone for the battle between the freedom of the press and political malfeasance that resonates well into the twenty-first century.