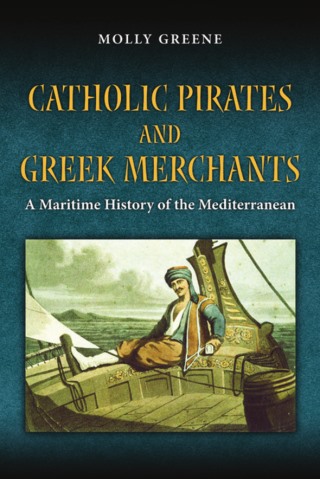 A Maritime History of the Early Modern Mediterranean

A new international maritime order was forged in the early modern age, yet until now histories of the period have dealt almost exclusively with the Atlantic and Indian oceans. Catholic Pirates and Greek Merchants shifts attention to the Mediterranean, providing a major history of an important but neglected sphere of the early modern maritime world, and upending the conventional view of the Mediterranean as a religious frontier where Christians and Muslims met to do battle.


Molly Greene investigates the conflicts between the Catholic pirates of Malta--the Knights of St. John--and their victims, the Greek merchants who traded in Mediterranean waters, and uses these conflicts as a window into an international maritime order that was much more ambiguous than has been previously thought. The Greeks, as Christian subjects to the Muslim Ottomans, were the very embodiment of this ambiguity. Much attention has been given to Muslim pirates such as the Barbary corsairs, with the focus on Muslim-on-Christian violence. Greene delves into the archives of Malta's pirate court--which theoretically offered redress to these Christian victims--to paint a considerably more complex picture and to show that pirates, far from being outside the law, were vital actors in the continuous negotiations of legality and illegality in the Mediterranean Sea.

Catholic Pirates and Greek Merchants brings the Mediterranean and Catholic piracy into the broader context of early modern history, and sheds new light on commerce and the struggle for power in this volatile age.

Molly Greene: Molly Greene is professor of history and Hellenic studies at Princeton University. She is the author of A Shared World: Christians and Muslims in the Early Modern Mediterranean (Princeton).