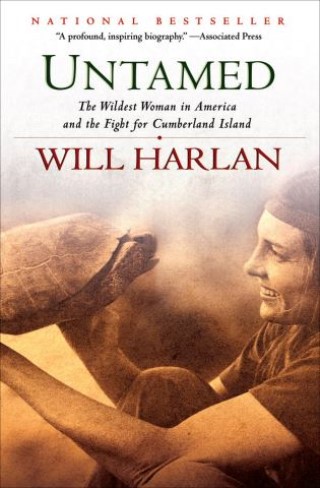 The Wildest Woman in America and the Fight for Cumberland Island

The inspiring biography of the adventuresome naturalist Carol Ruckdeschel and her crusade to save her island home from environmental disaster.

Cumberland, the country’s largest and most biologically diverse barrier island, is celebrated for its windswept dunes and feral horses. Steel magnate Thomas Carnegie once owned much of the island, and in recent years, Carnegie heirs and the National Park Service have clashed with Carol over the island’s future. What happens when a dirt-poor naturalist with only a high school diploma becomes an outspoken advocate on a celebrated but divisive island? Untamed is the story of an American original who fights for what she believes in, no matter the cost, “an environmental classic that belongs on the shelf alongside Carson, Leopold, Muir, and Thoreau” (Thomas Rain Crowe, author of Zoro’s Field: My Life in the Appalachian Woods).

“Vivid. . . . Ms. Ruckdeschel’s biography, and the way this wandering soul came to settle for so many decades on Cumberland Island, is big enough on its own, but Mr. Harlan hints at bigger questions.” —The Wall Street Journal

“Wild country produces wild people, who sometimes are just what’s needed to keep that wild cycle going. This is a memorable portrait.” —Bill McKibben, author of The End of Nature

“Deliciously engrossing. . . . Readers are in for a wild ride.” —The Citizen-Times

Will Harlan: Will Harlan is editor in chief of Blue Ridge Outdoors Magazine and a nationally acclaimed journalist whose work has appeared in National Geographic Adventure, Sports Illustrated, The Wall Street Journal, and BBC.com. He is also one of the country's top trail runners. He lives on a farm in the mountains of North Carolina.