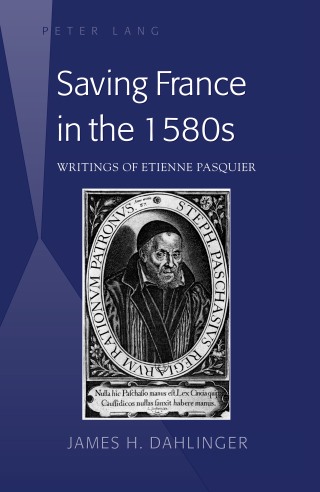 Etienne Pasquier (1529–1615) was a renowned magistrate of the Parliament of Paris, a poet, an advisor to the last Valois kings as well as to Henri IV, and a founder of modern French historiography. This book examines Pasquier’s use of various genres: the dialogue, the published correspondence, and ecclesiastic history as well as his self-fashioning and his recognition by posterity for his efforts to protect the French state against threats both real and invented during the French Civil Wars of Religion. Pasquier strategically casts the Jesuits as the enemy to aid his self-construction as guardian of France and her political survival.

James H. Dahlinger: James H. Dahlinger is a Jesuit and a specialist in French literature of the medieval and early modern periods. He received his PhD from New York University. He is Associate Professor of Foreign Languages and English at Le Moyne College, Syracuse, New York. The present book is a companion to Dahlinger’s Etienne Pasquier on Ethics and History (Peter Lang, 2007).