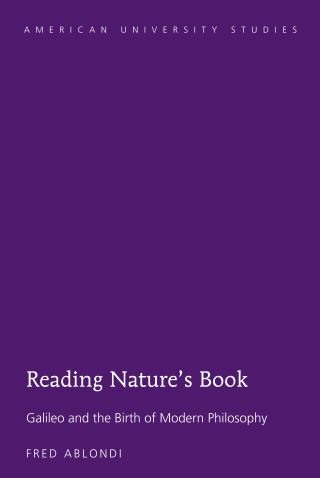 Galileo and the Birth of Modern Philosophy

Galileo Galilei (1564–1642) is widely recognized as one of the greatest scientific thinkers in history. Intriguingly, when offered a place in the Medici court in 1610, he requested the title of «Philosopher and Chief Mathematician.» Reading Nature’s Book: Galileo and the Birth of Modern Philosophy is the first book-length study written with undergraduates in mind that examines the philosophical implications (both theoretical and historical) of Galileo’s scientific discoveries, including many matters that were later taken up by seventeenth- and eighteenth-century philosophers. This close analysis of Galileo’s philosophical insights demonstrates the prominent place his thought should have in the history of early modern philosophy.
Reading Nature’s Book provides contextual material for college and university students enrolled in modern philosophy courses, introducing them to ideas and concepts that dominated philosophical discussion during the era. Furthermore, students and scholars interested in the history of philosophy of science will also benefit from a decidedly philosophical approach to such a leading scientific figure. Many of the topics explored by Galileo continue to be of philosophical interest today, including scientific methodology and the relation between science and religion.

Fred Ablondi: Fred Ablondi received his PhD. in philosophy from Marquette University. He is currently Professor in the Department of Philosophy at Hendrix College in Conway, Arkansas, where he is also the Director of The Steel Center of the Study of Religion and Philosophy. He is the author of Gerauld de Cordemoy: Atomist, Occasionalist, Cartesian (2005) as well as more than twenty articles on various topics in seventeenth- and eighteenth-century philosophy.