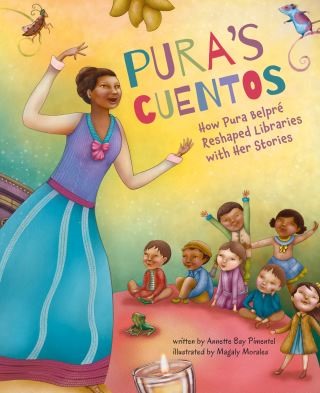 How Pura Belpré Reshaped Libraries with Her Stories

A lyrical, vibrant tribute to the amazing life and legacy of Pura Belpré, a lauded storyteller, librarian, and pioneer of bilingual storytimes

Pura’s abuela always has a cuento to share. She crows ¡Qui-qui-ri-quí! for Señor Gallo, booms Borom, Borom for Señor Zapo, and tells of a beautiful cockroach who loves a mouse. Pura clings to these stories like coquíes cling to green leaves.

When Pura grows up and moves from Puerto Rico to Harlem, she gets a job at the library, where she is surrounded by stories—but they’re only in English. Where is Señor Gallo? Where is Pérez the mouse? Where is Puerto Rico on these shelves? She decides to tell children the tales of her homeland in English and in Spanish.

Lyrically written, with lively illustrations, Pura’s Cuentos captures the exuberant spirit and passion of Pura Belpré: celebrated storyteller, author, folklorist, and the first Latina librarian in New York City. A pioneer of bilingual storytimes, she welcomed countless new families to the library, formed cultural bridges in her community, and broke the rules by telling stories that weren’t printed in books—at least, not yet.

Annette Bay Pimentel:
Annette Bay Pimentel has published several picture book biographies, including All the Way to the Top; Girl Running, which was a Junior Library Guild pick and received a starred review; and Mountain Chef, winner of the Carter G. Woodson Award. She lives in Moscow, Idaho. Magaly Morales is the illustrator of What Can You Do with a Paleta?, a Tomás Rivera Mexican American Children’s Book Award winner, as well as the picture books Chavela and the Magic Bubble and A Piñata in a Pine Tree. She was born in Xalapa, Veracruz, Mexico.