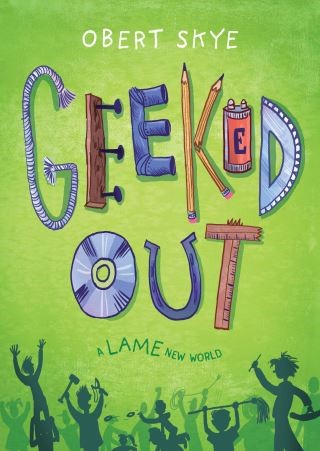 Waddle Jr. High has become a dystopian outpost with divided cliques—Pepville, Jockstown, Staffland, and even Geekdom. Society may be in danger but middle school must go on. Enter geeky Tip and all his friends: easy-to-blush Owen, coding master Xennipher, and brilliant, dependable Mindy, who've all had enough of being bullied and decide to take a stand. Together, they form a secret vigilante group: the League of Average Mediocre Entities, better known as LAME. With everything that’s going on in the world, their school could use a few heroes. And what if those heroes were geeked-up superheroes? Get ready. Better yet, get LAME!

This irrepressible spoof series is full of the same clever humor and hilarious cartoon illustrations as the Creature From My Closet series, but for a slightly older middle-grade audience.

This has Common Core connections.

Obert Skye: Obert Skye is the author and illustrator of The Creature from My Closet: Wonkenstein. He has also written the bestselling children's fantasy adventure series Leven Thumps and Pillage.