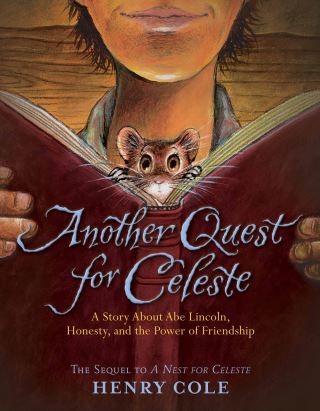 Another Quest for Celeste

Celebrated author and illustrator Henry Cole uses stunningly detailed black-and-white artwork to illuminate a tale of friendship between an adventurous mouse and a boy who would become one of America’s greatest presidents.

In this sequel to A Nest for Celeste, Celeste is hundreds of miles from home following an unexpected journey aboard a Mississippi steamboat. After mishaps and disasters, she finds herself on the frontier in southern Indiana. It's 1822, and Celeste meets a tall, lanky boy wielding an ax: a young Abraham Lincoln.

The journey reveals the harsh realities of frontier life for the Lincoln family. But with the help of Celeste’s new woodland animal friends and some creativity, she may just prove that even the littlest creatures can make a big difference. And it’s in losing her way that Celeste finds herself in a place she never expected—home, finally.

“A stand-alone sequel to A Nest for Celeste (2010), this chapter book has everything that made its predecessor so enjoyable: an inviting format, good storytelling, and at least one large, beautifully drawn shaded pencil illustration on each double-page spread. An inviting entry into historical fiction.” –Booklist

Henry Cole was a celebrated science teacher for many years before turning his talents to children’s books. He has worked on nearly one hundred and fifty books for children, including Unspoken, Big Bug, A Nest for Celeste, Jack’s Garden, and On Meadowview Street. Henry loves being outside, where he can sketch and write. His favorite sound is the first robin song of the spring. You can visit him online at www.henrycole.net.

Henry Cole is the illustrator of many beloved books for children, including his own A Nest for Celeste, Brambleheart, and Bayberry Island. While growing up in Virginia, he enjoyed hiking in the woods and fields around his farm, and making friends with several mice. He still enjoys being outside, where he loves to sketch and write. You can visit Henry online at www.henrycole.net.