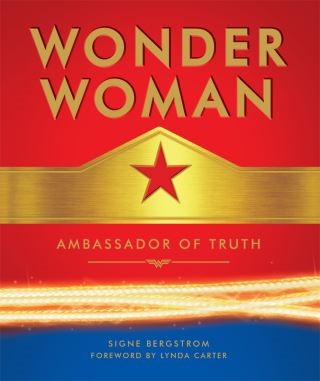 A gorgeous, authorized celebration of one of the most popular and enduring Super Heroes of all time—Wonder Woman—that chronicles the life and times of this pop-culture phenomenon and image of women’s strength and power, from her origins and role as a founding member of the Justice League to her evolution in television and film.

"As lovely as Aphrodite—as wise as Athena—with the speed of Mercury and the strength of Hercules—she is known only as Wonder Woman, but who she is, or whence she came, nobody knows!"—All-Star Comics #8 (December 1941-January 1942)

Created by William Moulton Marston and introduced at the beginning of America’s involvement in World War II, Wonder Woman—the fierce warrior and diplomat armed with bulletproof Bracelets of Victory, a golden tiara, and a Lasso of Truth—has been a pop-culture icon and one of the most enduring symbols of feminism for more than seventy-five years. Wonder Woman: Ambassador of Truth now tells the complete illustrated story of this iconic character’s creative journey. Signe Bergstrom examines Wonder Woman’s diverse media representations from her wartime comic book origins to today’s feature films, and explores the impact she has had on women’s rights and empowerment and the fight for peace, justice, and equality across the globe.

WONDER WOMAN and all related characters and elements are trademarks of and © DC Comics. (s17)

Signe Bergstrom is an editor and writer. Her most recent titles include Suicide Squad: Behind the Scenes with the Worst Heroes Ever and The Art and Making of The Greatest Showman. She lives in Croton-on-Hudson, New York.