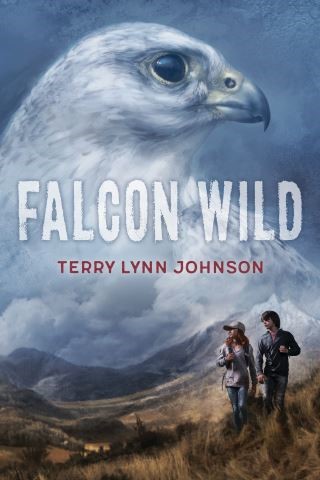 An action-packed, contemporary novel about surviving in the wilderness.

Thirteen-year-old Karma is desperate to become a certified falconer. At her dad's bird education center, she helps give demonstrations to guests and can fly the birds. But when her favorite rescued falcon, Stark, hurts Karma, her parents insist that they return the bird to its previous owner--in Canada. On the way to bring Stark back, a car accident in the middle of nowhere leaves Karma's dad trapped, and it's up to Karma to find a way to rescue him and her younger brother. When Karma loses her way trying to get help, she crosses paths with Cooper, a troubled teenaged boy. Lost for three days, the two figure out how to survive, and Karma teaches Stark to hunt like an actual bird of prey. Karma may be closer than she thinks to becoming a real falconer and having a real friend.

Terry Lynn Johnson: Terry Lynn Johnson is the author of middle grade adventures based on her experiences in the wilds of northern Ontario, Canada, including Ice Dogs, Sled Dog School, and Survivor Diaries, a series for reluctant readers (HMH). She is an award-winning member of the Outdoor Writers of Canada and currently works as a Conservation Officer with the Ontario Ministry of Natural Resources and Forestry.