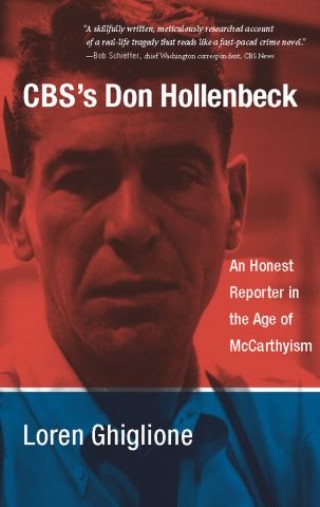 An Honest Reporter in the Age of McCarthyism

Loren Ghiglione recounts the fascinating life and tragic suicide of Don Hollenbeck, the controversial newscaster who became a primary target of McCarthyism's smear tactics. Drawing on unsealed FBI records, private family correspondence, and interviews with Walter Cronkite, Mike Wallace, Charles Collingwood, Douglas Edwards, and more than one hundred other journalists, Ghiglione writes a balanced biography that cuts close to the bone of this complicated newsman and chronicles the stark consequences of the anti-Communist frenzy that seized America in the late 1940s and 1950s.

Hollenbeck began his career at the Lincoln, Nebraska Journal (marrying the boss's daughter) before becoming an editor at William Randolph Hearst's rip-roaring Omaha Bee-News. He participated in the emerging field of photojournalism at the Associated Press; assisted in creating the innovative, ad-free PM newspaper in New York City; reported from the European theater for NBC radio during World War II; and anchored television newscasts at CBS during the era of Edward R. Murrow.

Hollenbeck's pioneering, prize-winning radio program, CBS Views the Press (1947-1950), was a declaration of independence from a print medium that had dominated American newsmaking for close to 250 years. The program candidly criticized the prestigious New York Times, the Daily News (then the paper with the largest circulation in America), and Hearst's flagship Journal-American and popular morning tabloid Daily Mirror. For this honest work, Hollenbeck was attacked by conservative anti-Communists, especially Hearst columnist Jack O'Brian, and in 1954, plagued by depression, alcoholism, three failed marriages, and two network firings (and worried about a third), Hollenbeck took his own life. In his investigation of this amazing American character, Ghiglione reveals the workings of an industry that continues to fall victim to censorship and political manipulation. Separating myth from fact, CBS's Don Hollenbeck is the definitive portrait of a polarizing figure who became a symbol of America's tortured conscience.

Loren Ghiglione: Loren Ghiglione, a journalism professor at Northwestern University's Medill School of Journalism, owned and edited New England newspapers for twenty-six years and served as president of the American Society of Newspaper Editors from 1989 to 1990. Following a five-year term as dean of Medill, he was president of the Association of Schools of Journalism and Mass Communication from 2006 to 2007.