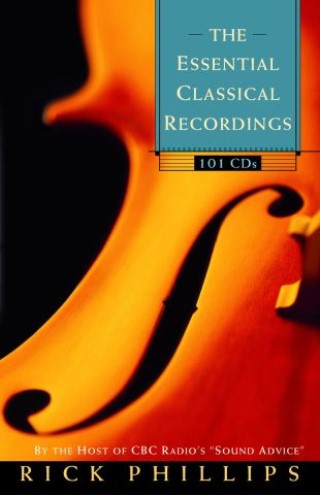 Most guides to classical recordings on CD comprise thousands of brief listings. In their attempt to be comprehensive, they end up being heavy and intimidating. Phillips knows better. He sticks to what he considers to be the 101 essential CDs, and tells readers not only why each one is the best recording in his opinion, but also why this piece of music belongs in their collection and where thecomposer fits into the evolution of classical music. Read consecutively, the recommendations — from medieval Gregorian chant to Arvo Pärt’s Fratres, written in 1977 — form a dazzling and concise history of classical music.

Bach, Beethoven, and Mozart are here, of course, along with other beloved but lesser-known composers, such as Josquin Desprez, Anton Bruckner, and Gabriel Fauré. And popular pieces, such as Bach’s Brandenburg Concertos, Handel’s The Water Music, and Elgar’s Enigma Variations, are complemented by such less-familiar but outstanding compositions as the Turangalila Symphony by Olivier Messiaen.

Connoisseurs and die-hard listeners to “Sound Advice” will appreciate having Phillips’s recommendations of specific recordings (and their catalogue numbers) between two covers at long last. And those who are just starting to explore the rich world of classical music will soon discover that Phillips is a guide they can trust.