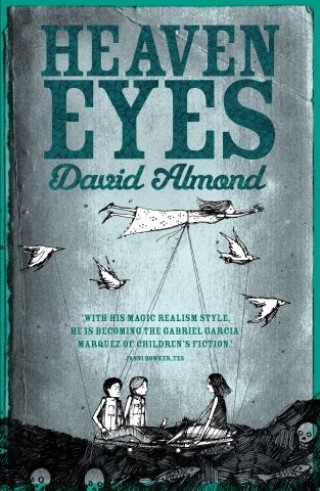 Erin, January and Mouse live in a children's home, Whitegates. They often dream of escape, and frequently journey into the outside world. Running away is something they know all about. But this time January builds a raft, and the three of them head precariously down river. Towards the Black Middens. This time they might never come back. When they stumble across a disused factory and its strange inhabitants - Grampa and Heaven Eyes - they wonder if they'll even have the choice. Heaven Eyes is the girl who should have drowned at sea. The mysterious girl desperately searching for her family, hoping that these three might be the family she has lost. She has a secret history only Grampa knows. And does he trust these three invaders enough to tell them? Erin feels a sisterly responsibility for Heaven Eyes, Mouse longs to belong anywhere and anyhow, but January thinks Grampa's a murderer. Whatever happens, all three have a part to play. . .

A stunning novel from the author of the modern children's classic Skellig - winner of the Carnegie Medal and the Whitbread Children's Book Award. David Almond is also winner of the 2010 Hans Christian Andersen award.

David Almond is the author of Skellig, My Name is Mina, Island, Bone Music and many other novels, stories, picture books, opera librettos, songs and plays. His work is translated into 40 languages, and is widely adapted for stage and screen. His major awards include the Carnegie Medal, two Whitbread Awards, the Eleanor Farjeon Award, the Michael L Printz Award (USA), Le Prix Sorcières (France), the Nonino International Prize, the James Kruss Prize and the Guardian Children's Fiction Prize. He has also won the Hans Christian Andersen Award, the world's most prestigious prize for children's authors. In 2021, David was awarded an OBE for services to literature.

David speaks at festivals and conferences around the world. He is Emeritus Professor of Creative Writing at Bath Spa University. He is widely regarded as one of the most exciting, inspirational and innovative children's authors writing today. He has one amazing daughter. He lives in Newcastle, the city in which he was born.