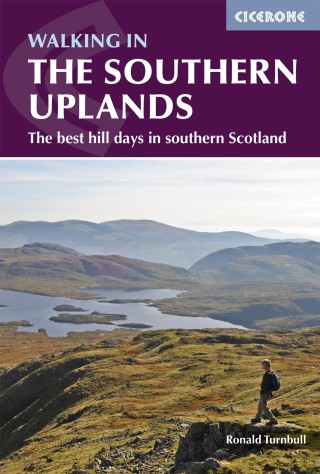 Walking in the Southern Uplands

This guidebook describes 44 routes and over 100 summits across the Southern Uplands of Scotland, stretching south-west from Edinburgh to the English border, including the Galloway and Pentland Hills. The walks range between 2 and 18 miles, suitable for walkers of all abilities. Highlights include Merrick and the Galloway Hills, Hart Fell and the Devil's Beeftub, Cheviot and the Border Ridge, Arthur's Seat and the River Tweed. Each route provides OS 1:50,000 mapping, information on distance, ascent, time, maximum altitude and terrain, as well as details of any variants or shortcuts. With notes on points of interest along the way as well as on transport and accommodation, the guide gives all the information walkers need. The Southern Uplands is a range that is about as big as the Pennines. It is wild hill country, with over 80 hills of 2000ft or more, and it boasts a real remoteness that is difficult to find elsewhere. All hillwalkers should experience these wonderfully characterful landscapes: green and gentle, but with hidden surprises and remote escapes. The routes are suitable from spring to autumn, and on winter days with good weather and snow conditions.

Ronald Turnbull: Ronald Turnbull was born in St Andrews, Scotland, into an energetic fellwalking family. His grandfather was a president of the Scottish Mountaineering Club, and a more remote ancestor was distinguished as only the second climbing fatality in Snowdonia. In 1995 Ronald won the Fell Running Association's Long-distance Trophy for a non-stop run over all the 2000ft hills of Southern Scotland; his other proud achievements include the ascent of the north ridge of the Weisshorn and a sub-2hr Ben Nevis race. He enjoys multi-day treks, through the Highlands in particular, and has made 21 different coast-to-coast crossings of the UK. He has also slept out, in bivvy bag rather than tent, on over 80 UK summits. Outside the UK he likes hot, rocky areas of Europe, ideally with beaches and cheap aeroplanes. Recently he achieved California's 220-mile John Muir Trail and East Lothian's 45-mile John Muir Way in a single season, believing himself the first to have achieved this slightly perverse double. He has also started trying to understand the geology of what he's been walking and climbing on for so long. Ronald lives in the Lowther Hills of Dumfriesshire, and most of his walking, and writing, takes place in the nearby Lake District and in the Scottish Highlands. His recent books include The Book of the Bivvy, and walking/scrambling guides Loch Lomond and the Trossachs, The Cairngorms and Ben Nevis & Glen Coe, as well as Three Peaks Ten Tors a slightly squint-eyed look at various UK challenge walks. He has seven times won Outdoor Writers & Photographers Guild Awards for Excellence for his guidebooks, outdoor books (including Book of the Bivvy), and magazine articles. He has a regular column in Lakeland Walker and also writes in Trail, Cumbria and TGO (The Great Outdoors). His current, hopelessly ambitious, project is to avoid completing the Munros for at least another 20 years.