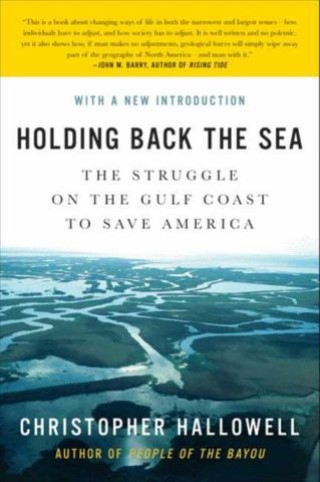 Holding Back the Sea

The Struggle on the Gulf Coast to Save America

Katrina's arrival on the Gulf Coast was a long time in coming. But it was assured. Since 1965, when Hurricane Betsy struck New Orleans, breached a levee, and flooded part of the city, everyone was waiting and talking about when the Big One would strike and do even more damage. Katrina was that hurricane, predictedand imagined before she struck, but so much worse in her reality.

Holding Back the Sea is about the consequences of ignoring the warning signs that nature provides and the struggle to convince the rest of the country that South Louisiana lay in the path of destruction. The signs were not subtle; there were Hurricanes Andrew in 1992, George and Mitch in 1998, and Ivan in 2004, among others. At one time or another in their journeys north, they all threatened New Orleans. Some had headed right for the city before veering to the east and west, sparing the Big Easy and reinforcing the nickname. But the Big Easy ended -- at least in reputation -- on August 29, 2005, when the Big One came ashore as Katrina.

Christopher Hallowell is a professor of English and journalism at Baruch College, City University of New York. He is the author of People of the Bayou, and coauthor and editor of Listening to Earth and Green Perspectives, and he lives in Brooklyn, New York.