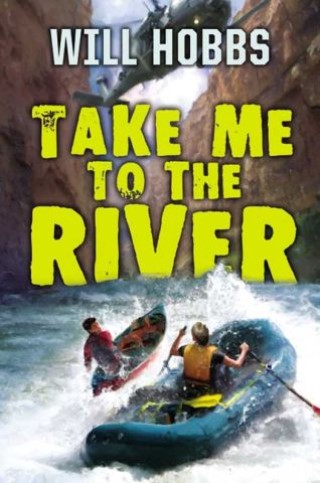 Take Me to the River

Deep in trouble,
Deep in the canyons

Fourteen-year-old Dylan Sands has come all the way from North Carolina to Big Bend National Park, on the Texas/Mexico border, to paddle the fabled Rio Grande. His partner in adventure is a local river rat, his cousin Rio. As the two are packing their boats for ten days in the canyons, six Black Hawk helicopters appear overhead and race across the river into Mexico.

The army won't tell the boys what's happening, but they are given a weather advisory: A hurricane is approaching the Gulf of Mexico. Dylan and Rio have their hearts set on their trip and can't give it up. Rio believes that their chances of running into border troubles or a major storm are slim to none.

By canoe and raft, Dylan and Rio venture into the most rugged and remote reaches of the U.S./Mexico border. You may well not see another human being during the duration of your trip, the guidebook tells them. They don't, until a man stumbles into camp with a seven-year-old boy. A storm is brewing as the man who calls himself Carlos begs for help . . . and the boy is trembling with fear.

Will Hobbs is the award-winning author of nineteen novels, including Far North, Crossing the Wire, and Take Me to the River.

Never Say Die began with the author's eleven-day raft trip in 2003 down the Firth River on the north slope of Canada's Yukon Territory. Ever since, Will has been closely following what scientists and Native hunters are reporting about climate change in the Arctic. When the first grolar bear turned up in the Canadian Arctic, he began to imagine one in a story set on the Firth River.

A graduate of Stanford University, Will lives with his wife, Jean, in Durango, Colorado.