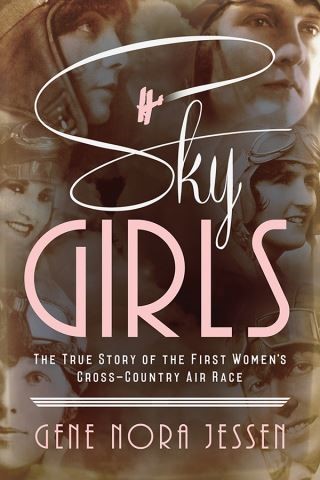 The True Story of the First Women's Cross-Country Air Race

The year is 1929, and on the eve of America's Great Depression, nineteen gutsy and passionate pilots soared above the glass ceiling in the very first female cross-country air race. Armed with grit and determination, they crossed thousands of miles in propeller-driven airplanes to defy the naysayers who would say it cannot — not should not — be done.

From the indomitable Pancho Barnes to the infamous Amelia Earhart, Sky Girls chronicles a defining and previously forgotten moment when some of the first women pilots took their rightful place in the open skies. For a country on the brink of defining change, they would become symbols of hope, daring, and the unstoppable American spirit. And for generations to come, their actions would pave the way for others to step into the brave unknown and learn to fly...

Written by female pilot and member of the original Mercury 13 Gene Nora Jessen, Sky Girls celebrates the strength and smarts of these trailblazing women, and sits perfectly on the shelf next to The Radium Girls, Hidden Figures, or Code Girls.

Gene Jessen: Illinois native Gene Nora Jessen was introduced to flying as a cadet in the Chicago Civil Air Patrol. She was drawn to the University of Oklahoma's flight training program, became a flight instructor on the flight school faculty and finished working her way through college teaching flying. Along with 25 female pilots she was invited to participate in an astronaut research program about the time of the original Mercury astronauts in 1961. Along with 12 other candidates she passed the physical exams and they became called the Mercury 13, however further testing was canceled.

The stars were aligned in Gene Nora's favor and she was hired by Beech Aircraft Corp in Wichita for what she considered the dream job of all time. She became one of the "Three Musketeers" flying one of three airplanes in formation for three months across 48 states introducing the new Beech model. Continuing on at the Beech factory, she obtained further ratings and flew the entire Beech line. Gene Nora met her husband Bob at Beech and they soon migrated to Boise, ID to found a Beech dealership.

Gene Nora has remained active in aviation, serving on the Boise Airport Commission, installed in the Idaho Aviation Hall of Fame, received the Mercury 13 NASA Award, Master Pilot Award, an Honorary PhD., and became an international President of The Ninety-Nines. She is the author of Three books  aviation, of course.

Gene Nora and Bob, who was a WWII B29 pilot, are the parents of two children and are now retired. Gene Nora has flown a dozen air races through the years and is still flying.